August 2020 saw the eruption of the biggest anti-government protests in Belarus’ history, after allegations arose that President Alexander Lukashenko rigged the results of the elections which declared him the winner by a large margin. Lukashenko, who has ruled Belarus for the past 26 years and has been referred to as “Europe’s Last Dictator”, instructed the authorities to respond decisively and violently against the protesters. Polish photojournalist Jedrzej Nowicki examines the scars left behind by these events. Alongside physical scars such as bruises, injuries and fractures, and the trauma which scarred the country’s residents emotionally, the situation left a deep scar in the very fabric of Belarusian society, which now stands divided.
The photographs depict protesters who’ve been victimized by government forces and families of civilians tortured or even killed by security forces for demanding their freedom, but also include images of young soldiers who were dragged into this conflict against their will. Nowicki documents the terror that permeated the atmosphere during the protests and emphasizes the courage of their participants, many of whom have lived their entire lives under Lukashenko’s rule. For many, this was the first protest they ever attended.
Nowicki, a photojournalist specializing in human rights issues, finds similarities between the situation in Belarus and Poland’s past, and therefore sees the significance in telling the story of the people of Belarus who strive for freedom. The photographs in the exhibition may tell of a certain place and a certain people, but the desire for freedom – individual or national – is a universal one and can be found everywhere on the planet, as the past year has clearly shown.

In collaboration with the Adam Mickiewicz Institute 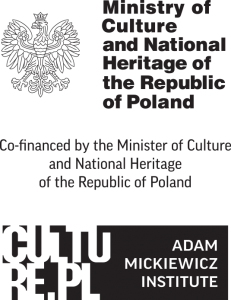